Mandatory detention is one of the most damaging aspects of Australian government policy. Major contractors in the supply network that supports mandatory detention include Serco, IHMS, Save the Children and Transfield Services. Contracts with the Salvation Army ($74 million – Nauru) and G4S ($80.5 million – Manus Island) come to an end this month.

Transfield Services Limited, an ASX-listed company, notified the ASX on 29 January that, “subject to completion of contract negotiations, the Company will be responsible for Garrison Support Services and Welfare at both Manus Island and Nauru.” END_OF_DOCUMENT_TOKEN_TO_BE_REPLACED

[Here is what has been circulating as the draft Code of Conduct. pdf NB: see note below]

The new “Code of Behaviour” for asylum seekers in the community on Bridging “E” visas — complete with the invocation of miscegenation — appears designed to incite broader sections of the populace, outside the defence forces, to violence against asylum seekers. As Bridging Visa conditions become harsher, with no work and conditional income support, the Minister has already signalled what kind of ‘anti-social behaviour’ — such as gatherings of bridging visa holders in apartment blocks — will constitute a breach of the ‘Code of Conduct’ and which can result in a cut to income support or being sent offshore after visa cancellation. The more impoverished people become, the more they will have to resort to informal and ‘illegal’ economies to survive. The ‘Code of Behaviour’ then becomes a fait accompli — a standard designed for and compelling breach — and then giving license to the consequences that follow for asylum seekers. The ‘Code of Conduct’ vests power over asylum seekers’ lives directly in the hands of the Australian populace — the very same people whom the Minister predicts will be aggrieved by asylum seekers engaging in ‘anti-social acts’ by gathering in large groups in one-another’s homes. The Minister’s attempt to dissolve certain categories of Protection visa and make these the subject of his personal powers is a further attempt to dictate and curtail the flow of asylum seekers into the country along racial lines. Reposing power with the Minister for determing claims under ‘complementary protection’ simply enables the Minister to grant visas to people from ethnic backgrounds that constitute his key constituencies.

“Who are the Australian Defence League,” by Andrew Fleming:

The recent revelation that members of the Royal Australian Navy (RAN) responsible for carrying out “Operation Sovereign Borders” are also members or supporters of the anti-Muslim Australian Defence League (ADL) has caused a great deal of embarrassment to the authorities. It has also generated no small amount of concern among the broader public.

[read the rest of the article here] 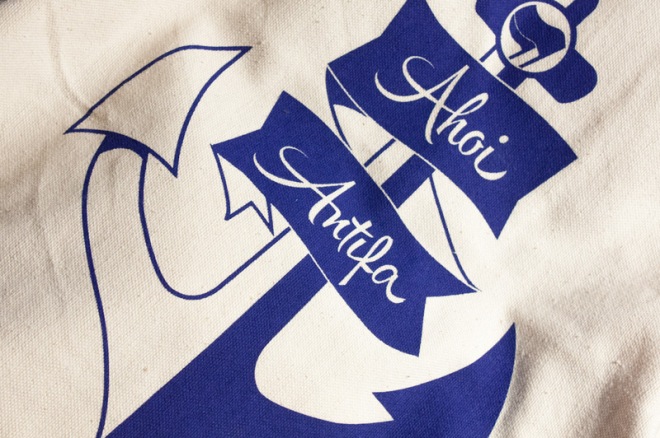 This is an organisation chart of the command structure of Operation Sovereign Borders, as far as it has been possible to ascertain. [Click on the image & open in another tab to see the full size]

This last few weeks has provided a quick lesson in the myth and mechanics of border policing in and beyond Australia. Below is a Working Paper on ‘operational matters’ in the related campaigns. It is meant to provoke a focused discussion about how to bring about change. [An earlier version of this was distributed on January 26, 2013.]

[Read the rest of the discussion paper here]

Antifa is the name given to anti-fascist networks around the world since the rise of fascism in Europe. It is above all a call — an alert — for the self-defense of communities targeted by neo-Nazis and the far Right when the state either no longer serves to protect them or is undertaking such attacks itself.

It involves three dimensions: practical, on-the-ground solidarity of diverse communities; scrutiny of neo-Nazi and far Right organizing efforts; and longer-term attention to the preparation of the ground for the legitimation of violence.

There is only one aim to antifa actions: autonomous self-defense undertaken for and by diverse communities, in the defense of that diversity.